On January 7, 2011 our precious baby girl was born. Little did we know that within 14 hours she would be taken away in a Neonatal Ambulance on her way to Vanderbilt Children’s Hospital in Nashville. Reece was the little girl we had wished for. We had a healthy 6 year old boy, Riley, who couldn’t wait for his baby sister to come home. Reece spent 8 days in the NICU where she saw several specialists. She left with a NG tube because she just wasn’t eating very well. She had genetic testing done, but we didn’t learn her official diagnosis until February.

Reece was scheduled for her first cataract surgery and because we had a genetics appointment the day before, we decided to get a hotel in Nashville. To say we were shocked when we left the genetics appointment would be an understatement. We NO CLUE… we didn’t search the internet after she was born… we just took her home and learned our new normal and loved the child we were given.We spent the night in our hotel room crying and coming to terms with what we had just been told, all the while trying to prepare her for the surgery she was going to have the next morning.

Reece, like most Rhizo Kids, excelled in her own way. The smile she had was contagious.. She couldn’t talk, but she could communicate to you… Whether it be by her grunts, her smile, her cries or her belly laugh… you knew what she wanted… and most of the time, she wanted you to sing her the A, B, C’s or turn her upside down. The rougher you were with her, the more she laughed.

Reece was almost 4 when she began requiring oxygen full-time. She had just been diagnosed with Inflamed Bowel Disease and had spent several days in the hospital. In August of 2015 she gave us quite the scare. She was in the ICU and was requiring high flow oxygen and the talk of intubation had to happen. Luckily we had a pulmonary doctor who had several heart to heart talks with us during routine appointments, so we had knew what we wanted for her. We knew the time would come where we would have to make decisions regarding Reece and end of life, but to actually have to do it, was harder than we thought. Luckily we were able to bring her home from that hospital stay.

March 14, 2016 Reece was sent via ambulance to Vanderbilt, where she spent 6 days, after being diagnosed with the Corona Virus. We celebrated Easter and on March 29th she was back in the hospital… the ICU this time. She was diagnosed with Adenovirus… We knew this was a tough virus for our children, as there had just been another Rhizo Kid hospitalized in serious condition a few months before. I left Reece on Thursday to go home to be with Riley… She was laughing and playing with Daddy and Marsha (a Rhizo mom). I got a call the next morning that Reece was going to have to be put on bi-pap-which she HATED, so I made my down to Nashville. Her lung x-rays had also gotten worse from the first day she was in the the hospital. Friday brought some scary “episodes” with Reece… to the point that it was decided that we needed to have Riley brought there to see her… “She is a very sick little girl” is what we were told and we were once again faced with the fact that we were going to have to make decisions about her end of life. Reece had several visitors Friday night and they knew it might be the last time that they saw her. Riley had some special alone time with her, me and Brian. So thankful for Lauren for bringing him and my parents down.

April 2, 2016 is a day we will never forget… a day that part of our heart died. Reece had a few more episodes and Brian and I decided that when the next one happened, we would take the mask off her and let her go.. We knew she was tired, we knew it was the right thing to do, but it wasn’t an easy decision. We knew for 5 years and 3 months that this day would come, but it sucked. At 4:27 PM, Reece took her last breath in her Daddy’s arms in a room full of people who loved her. Her funeral was the greatest celebration of life, filled with her favorite things… Taylor Swift, “Let it Go”, the A, B, C’s, the color pink and Minnie Mouse.

We are so thankful for the family we gained because of Reece… The RCDP family is a family that is there for each other…through thick and thin… the good and the bad…the happy and the sad… We were once strangers, but brought together by four little letters. We will forever be grateful for everyone who answered questions, came to visit, texted, prayed and who continue to pray for us. 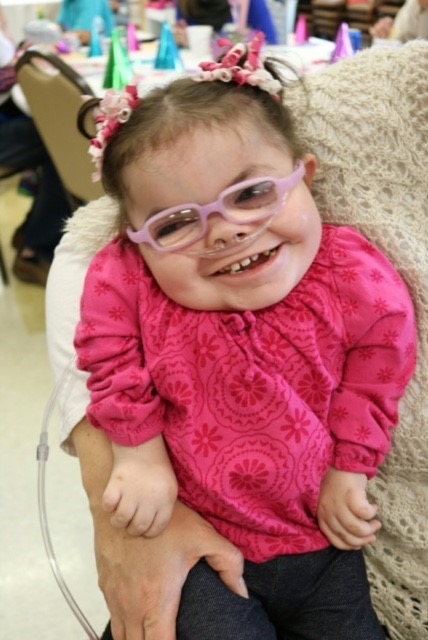